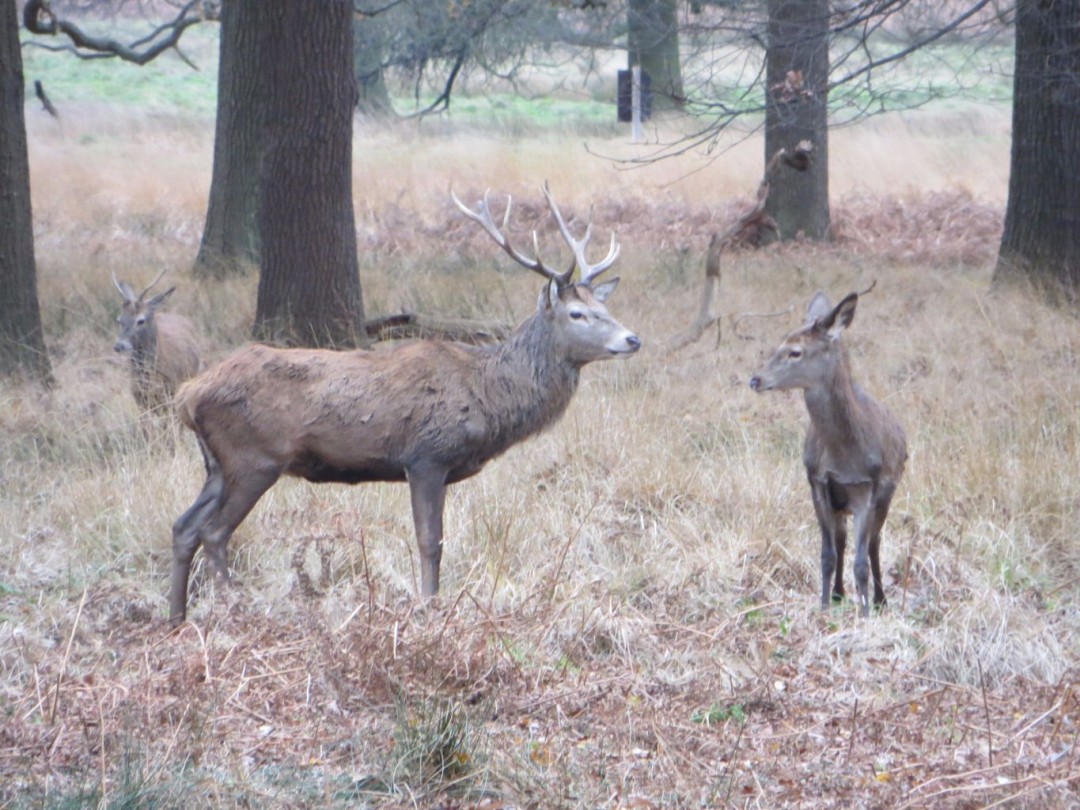 Like many animals around the world, the red deer was once rare to find in countries within Europe. Although, in recent decades their population size has increased; giving humans the opportunity to appreciate the fascinating lives of these critters.

Red deer life in a herd

The red deer, also scientifically known as Cervus elaphus, is native to the UK and it’s considered one of the largest mammals in the country. However, this critter was slowly introduced to other countries around the globe; making their survival slightly more challenging by similar size or bigger predators.

These magnificent creatures naturally stay in a herd. There is usually a range of herds that could be witnessed. There are herds that contain solely males (stag) that are considered as the bachelor group, which they join as soon as they have reached puberty and are accepted by the other stags.

The bachelors are likely to stay near a herd of females (hind) and compete for them during the mating season, which occurs between September and November. Once a hind is pregnant, they will give birth to one calf, under eight months. The hinds stay within their own group and protect their young deer (calf) until they are strong enough to survive. A calf is dependent on its mother’s milk for the first 3-4 months; some may stay dependent for longer. However, after a year calves disperse and join specific herds. The hinds tend to stay with other hinds while the stags try to join the groups of bachelors. 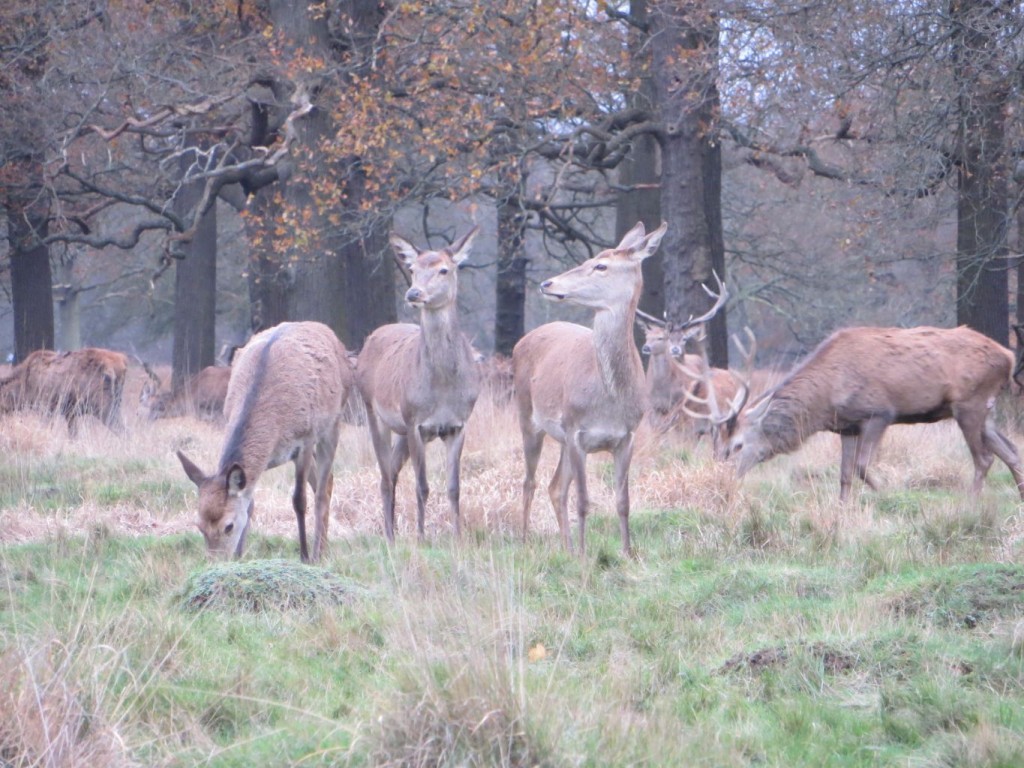 A small group of hinds having lunch whilst staying near the stag for protection.

How long does a red deer live?

Like many animals, the red deer’s lifespan is on average 16 years. Although, in captivity,  they are likely to live up to 20 years.

When is a calf considered an adult?

These creatures have to mature quicker if they wish to have a few offspring and pass on their genes. A hind is ready to mate by the age of three. In contrast with the male calf, they are sexually mature at the age of four.

As they all grow older you’ll be able to notice their thick coats, with a shade of gray-brown colour that stands out during the winter months. During the summer, it’s another story. Their coat becomes thinner, shinier and the colour changes to red-brown. If you take a closer look, you’ll also notice a distinctive black fur line on their back; descending from the top of their neck to their rump, which has a small area of light brownish-cream fur. 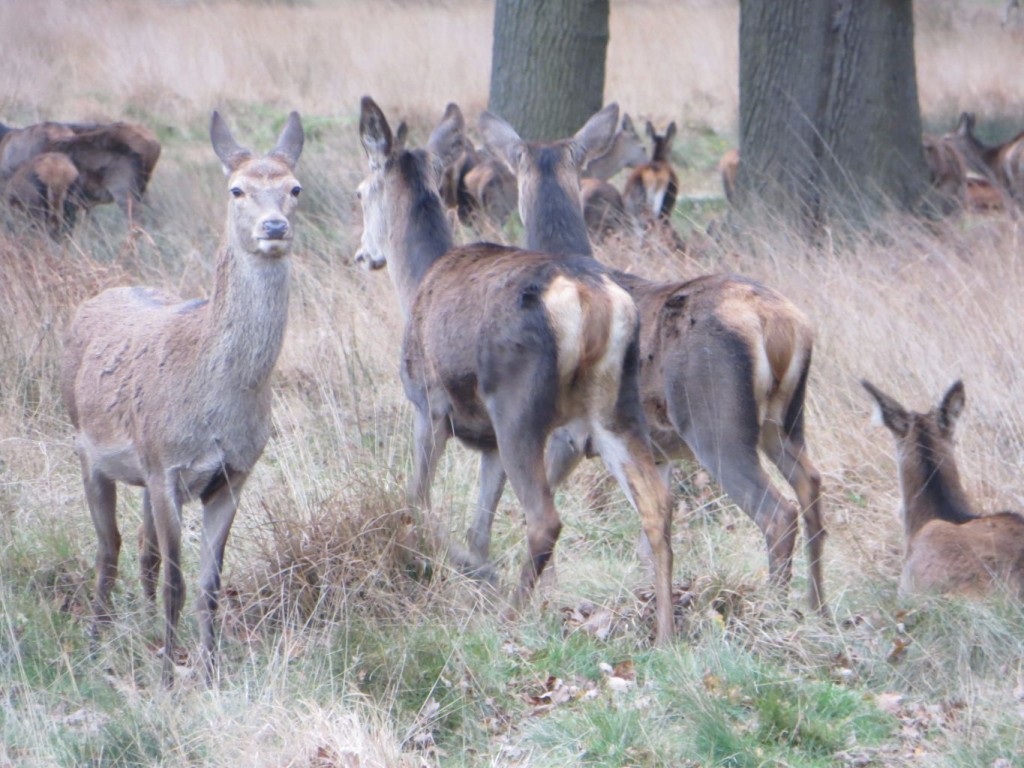 A group of hinds from the front and behind. These red deer have gray-brown coats with black fur on their back.

In order to tell the difference between genders; stags are the only ones that have antlers and larger bodies compared to the hinds. If you want to know the age of a stag you can tell by looking at the length, colour and thickness of their antlers. Their antlers are made out of bone, which begins to grow rapidly during their first year of spring, by 1 inch (2.5 centimeters) per day. Regardless of the size of their antlers; they shed every year during the winter. Nonetheless, this tranquil animal prefers to eat between dawn and dusk. During the hours they are not eating, they are relaxing in woodland areas, where they are likely to remain undisturbed. 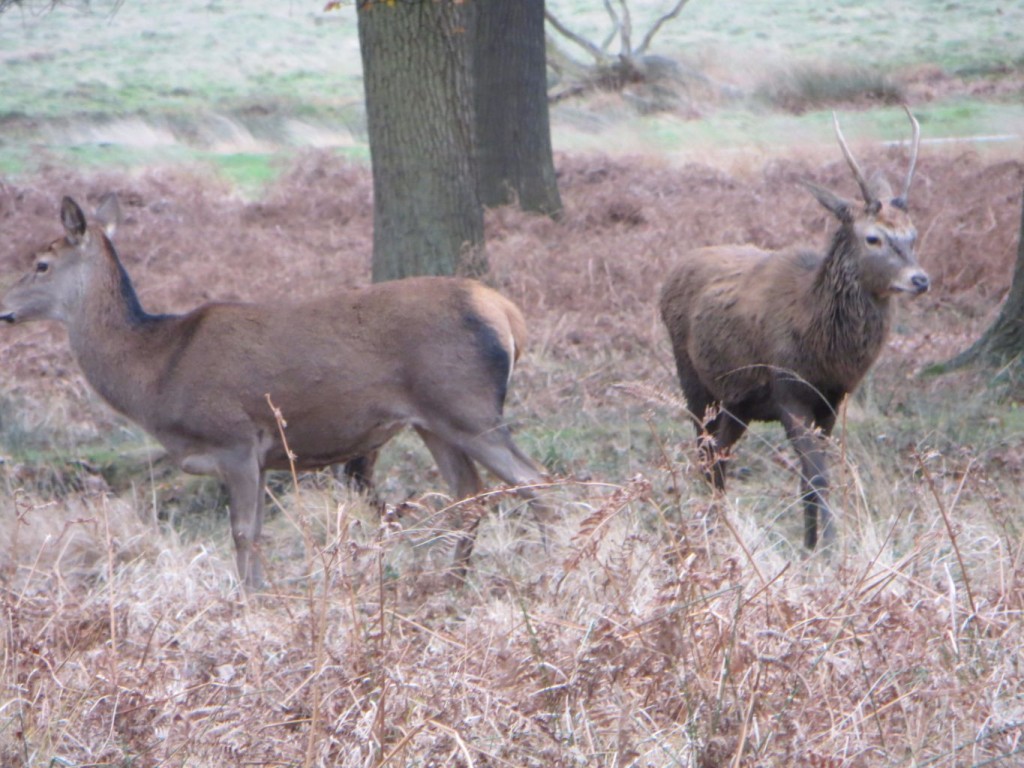 A red deer hind walking past a young red deer stag with short and thin antlers. 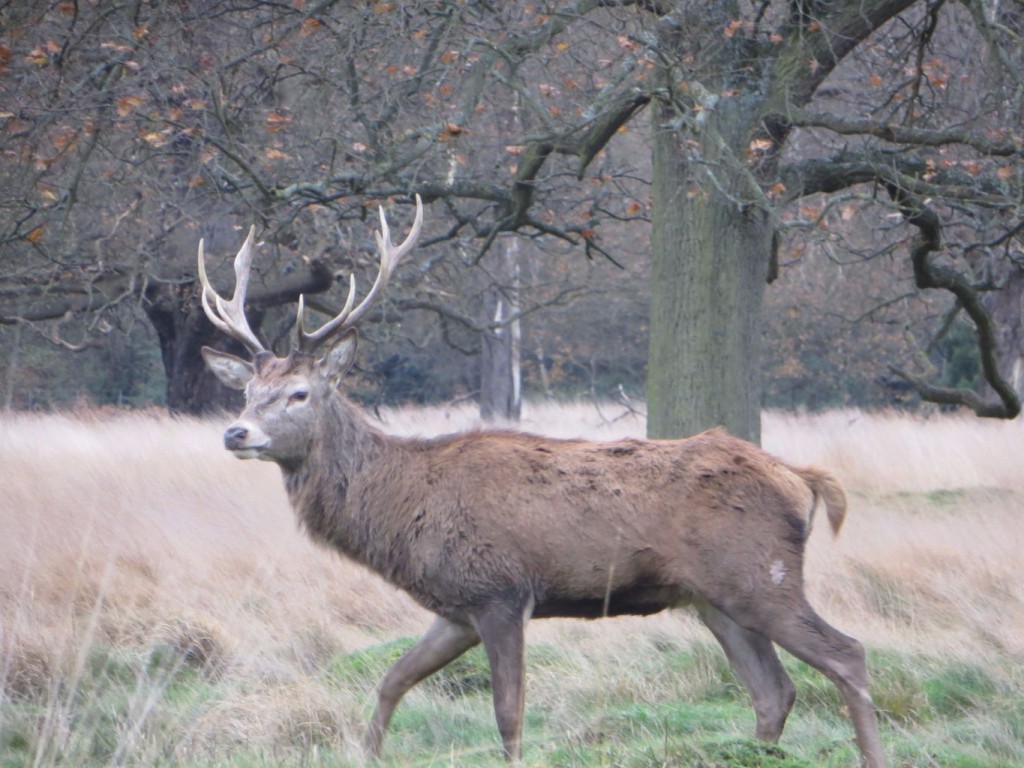 An older red deer stag with large, light and not too thick antlers. 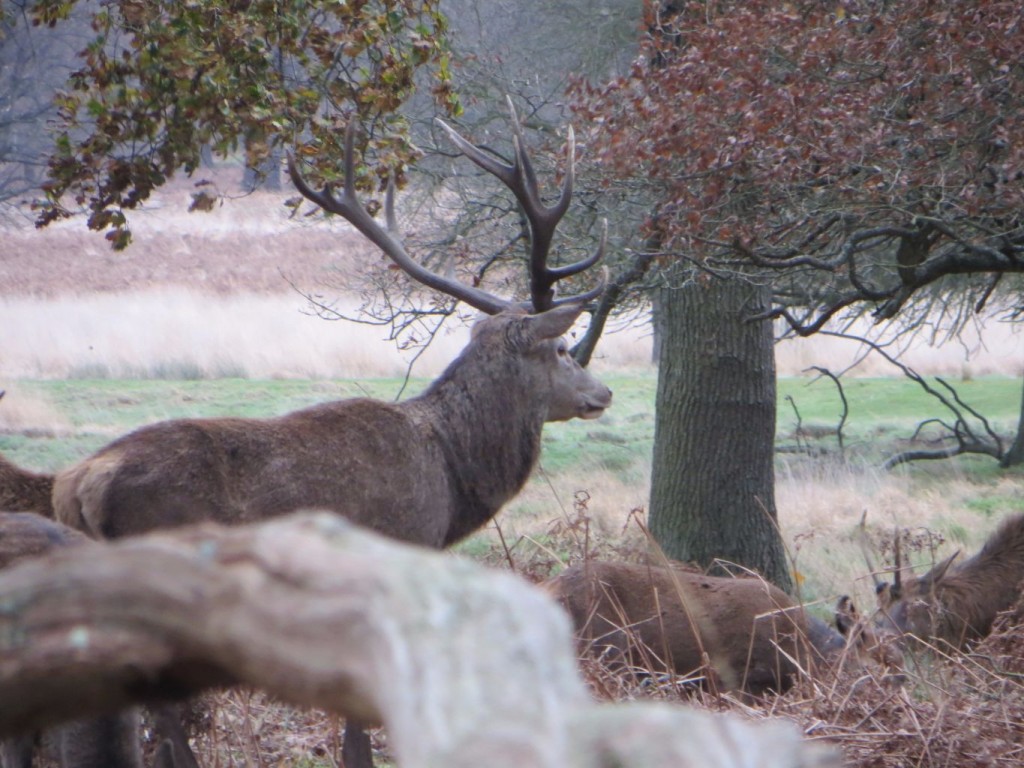 An older red deer stag with larger, darker and thicker antlers compared to other stags.

On a daily basis, these herbivorous creatures enjoy to eat the leaves of youthful trees and shrubs, but during the moments they are not feeling too adventurous, especially during the hot days of the summer they will happily eat traditional meals like:

However, when the challenging days of autumn and winter arrive; a herd of red deer will scout for additional sources of food, such as:

On  the other hand, if you come across a red deer and wish to feed it from a reasonable distance, here’s the following compliments you can offer:

Red deer behaviour around humans and other animals

Humans and red deer have cohabited for centuries, but it’s become a norm to stay in their own familiar space. Despite this, there are occasions when there’s a crossover in territories. If you encounter a group of deer, you’ll want to keep your distance. Deer are sensitive creatures that don’t particularly appreciate unsettling noises or unwelcome visitors, such as humans taking a walking with their dog(s), especially when don’t have a lead.

How often is a calf left alone?

A calf will always be near its mother. Hinds like to give their young space to explore and relax, but they are never left alone or abandoned. Mothers do not respond nicely to possible dangers to their offspring, especially if they had recently given birth. 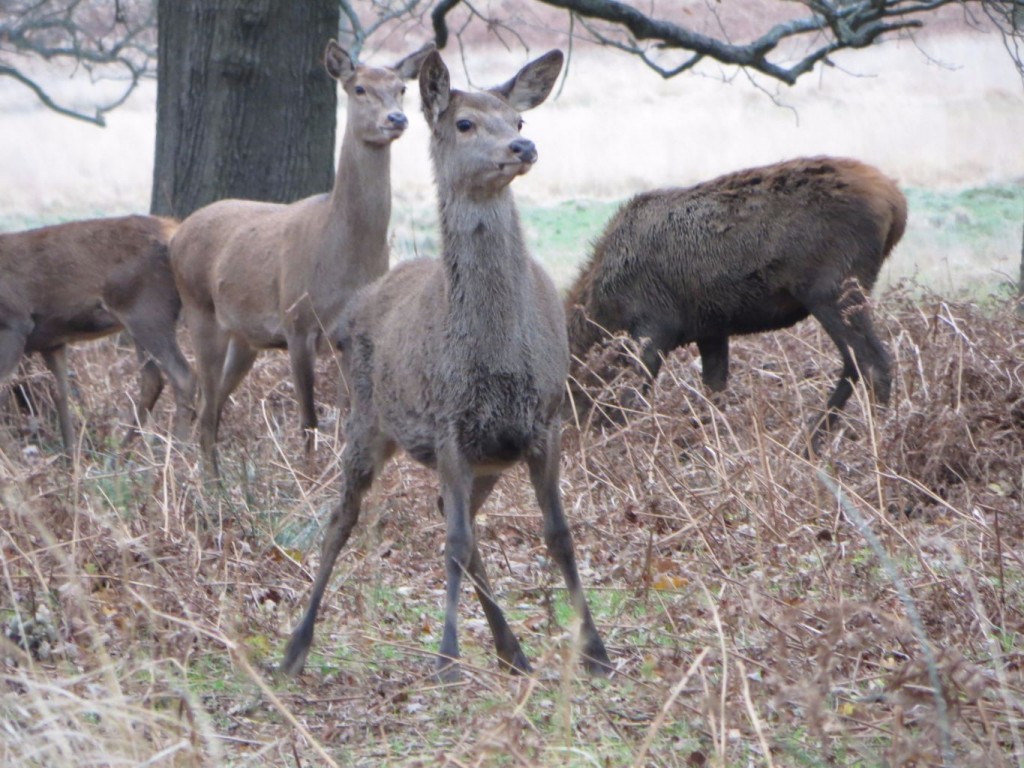 Juvenile red deer, getting ready to run with mother hind behind; keeping an eye on any possible danger.

It may seem tempting to approach a small group of deer or to pat on the head of a calf that has walked off from its herd. But even the young can potentially have ticks that could be spread to humans.

In their defense, ticks can be spread from other animals like horses, birds, rodents, forest, grassland, brushwood, etc. Moreover, the problem isn’t getting this particular parasite, it’s the type of disease it may be carrying that could infect humans, which can be either Lyme disease or tick-borne encephalitis. On the other hand, it’s important to acknowledge that deer are not considered to be a major cause of spreading ticks. Nonetheless, if you are visiting a park or an area that has deer; be careful not to touch them, even though it can be very tempting. 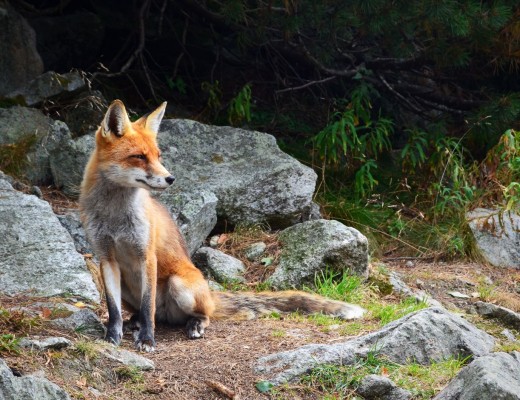 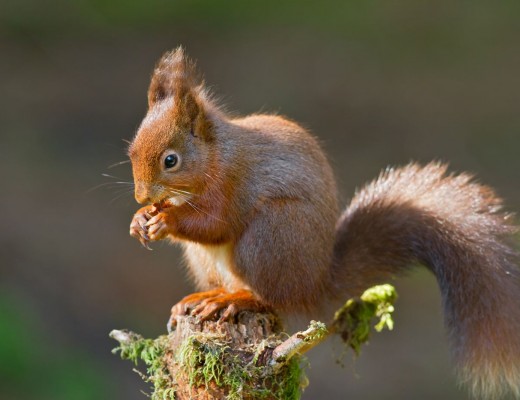